DASH, or Digital Audio Stationary Head, was a recording format released by Sony in 1981/1982 in various formats from 2 track through to 24 track machines. All were 16 bit recorders using sample rates from 44.1kHz to 48kHz. Unlike the earlier digital recording systems Sony released (such as the Sony PCM-1630), the DASH system used a stationary head instead of the helical scanning system.

Using tape that was 1/4 inch or 1/2 inch and on reels up to 14″, these new digital recorders had lower tape costs than the 2″ 24 Track analogue machines of the time. The machines themselves however were not cheap, with the Sony 3324 costing US$150,000. Various models came and went, culminating in the Sony 3348HR, a 48 track recorder with 24 bit recording at a cost of US$250,000. Many amazing records have been recorded on these machines.

Audio data is recorded on the Sony PCM-3348HR as linear PCM with a strong cyclic redundancy, allowing the tape to be physically edited with a razor blade like analog tape, and played back with no loss of signal.  The heads are stationary, which is in contrast to DATs, ADATs and DTRS cassettes, which all record using a rotating head that helically scans the tape making tape splicing virtually impossible. (The fact that the tape was inside a cassette did not help either!)

Outline of the Sony PCM-3348HR

The Sony PCM-3348HR is a 48-channel 24-bit/16-bit digital audio recorder, using 1/2-inch tape in DASH (Digital Audio Stationary Head) and DASH PLUS formats. In addition to a range of standard capabilities for a digital audio recorder, the Sony PCM-3348HR is compact and has low power consumption, while providing a wide selection of options to meet a variety of operating requirements.

In combination with the supplied Sony RM-3348HR remote control unit, the Sony PCM-3348HR provides not only basic recording and playback functions, but also auto punch-in/out, separate settings for each channel, memory for up to 100 cue points, variable speed playback, timecode chase, sound memory, digital copy, and editing functions. These functions allow the Sony PCM-3348HR to be used as a base component in a wide range of application systems.

Sony mastery of digital audio technology has been clearly demonstrated over many years. Of the developments that it has pioneered, that of the 16-bit DASH (Digital Audio Stationary Head) format has to be one of the most significant. Over the past fifteen years, Sony has introduced a range of 24 and 48track DASH recorders that have made the format a de-facto standard in multichannel recording.

In particular the Sony PCM-3348, the world s first 16-bit, 48-track recorder when it was introduced in 1988, has achieved a legendary status in many topclass recording studios worldwide. For its supreme sound quality, high performance, excellent reliability and convenient operational features, it is still used as the most powerful and reliable workhorse at the front-line of audio production.

However, the growing demand for higher sound quality and the ability to master at resolutions higher than 16-bit have become essential. As part of its overall strategy to provide the recording industry with an enhanced, but affordable, production platform, Sony has developed a full range of products for recording, producing and mastering at 24 bits. Along with the OXF-R3 Digital Audio Mixing Console and PCM-9000 Master Disc Recorder, Sony takes pride in introducing the PCM-3348HR 48-track DASH PLUS 24-bit recorder.

Developed based on the experience and know-how attained through the success of the PCM-3348, the PCM-3348HR uses the basic framework of its predecessor, maintaining its system configuration, tape transport and operational style, while implementing innovative functions such as a vocal selector function, an enhanced sound memory function and Sony 9-pin serial remote interface capability.

The PCM-3348HR, a product of the latest innovative Sony technology, is set to create a new standard for the next generation of high-quality digital audio multichannel recorders and is proof of the continuing Sony commitment to maintaining outstanding excellence in sound quality. 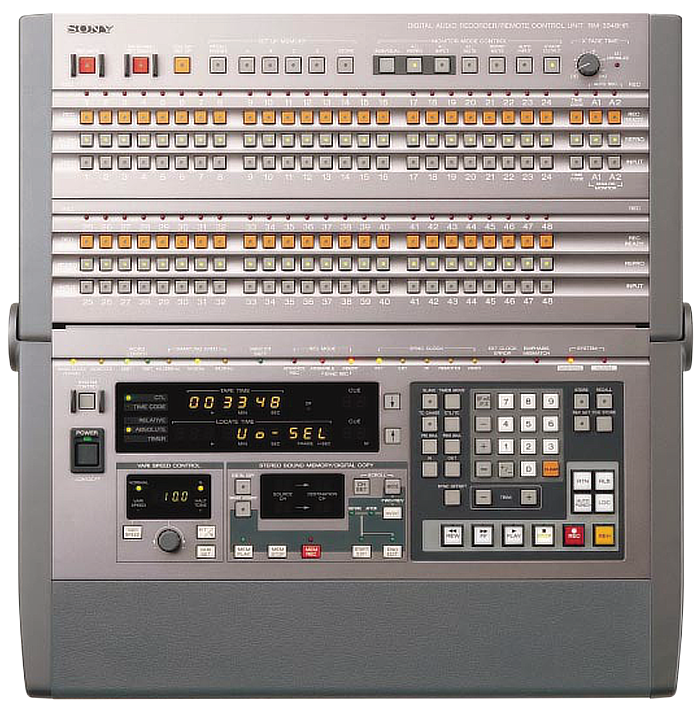 All the functions of the PCM-3348HR can be remotely controlled from the suppplied RM-3348HR Remote Control Unit. Convenient functions, such as the digital copy, sound memory and vocal selector functions, as well as channel setup can be conveniently controlled and set via the RM-3348HR by simple key strokes.

Supported by its highly reliable tape transport and refined servo control system, the Sony PCM-3348HR provides 24-bit 48-channel recording/playback by increasing the tape speed to 1.5 times that of current 16-bit DASH machines. By employing this technique, it can perform both 16-bit (at 30ips and 48kHz) and 24-bit (at 45ips and 48kHz) recording/playback without changing the type of tape used.

With dither circuits incorporated in the A/D conversion circuitry, superb sound quality is assured even when recording the output of the internal high-quality 20-bit convertors in 16-bit mode.

The Sony PCM-3348HR employs the DASH PLUS format. This is an extension of the DASH format that allows recording and playback of 24-bit signals exclusively but also retains compatibility with the 16-bit DASH format. The Sony PCM-3348HR can therefore both record in 16-bit and playback tapes recorded by current 16-bit DASH recorders by using its 16-bit mode.

The Sony PCM-3348HR will frequently be used in conjunction with mixing consoles, such as the Sony OXF-R3, which already incorporate high resolution A/D and D/A conversion. For this reason, convertor boards for the Sony PCM-3348HR are provided separately as the optional DABK-3343HR A/D D/A Convertor Board Pack. The DABK-3343HR consists of twelve A/D D/A convertor boards, each board having a four channel capability, and the complete set of boards can be installed into the slots provided inside the front doors of the main unit. To provide ultimate sound quality for analog input signals, 1-bit 64 times oversampling ∆∑ type A/D convertors and 20-bit decimation filters are used for A/D conversion. For D/A conversion, 24-bit eight times oversampling interpolation filters and 20-bit multibit type D/A convertors are employed. 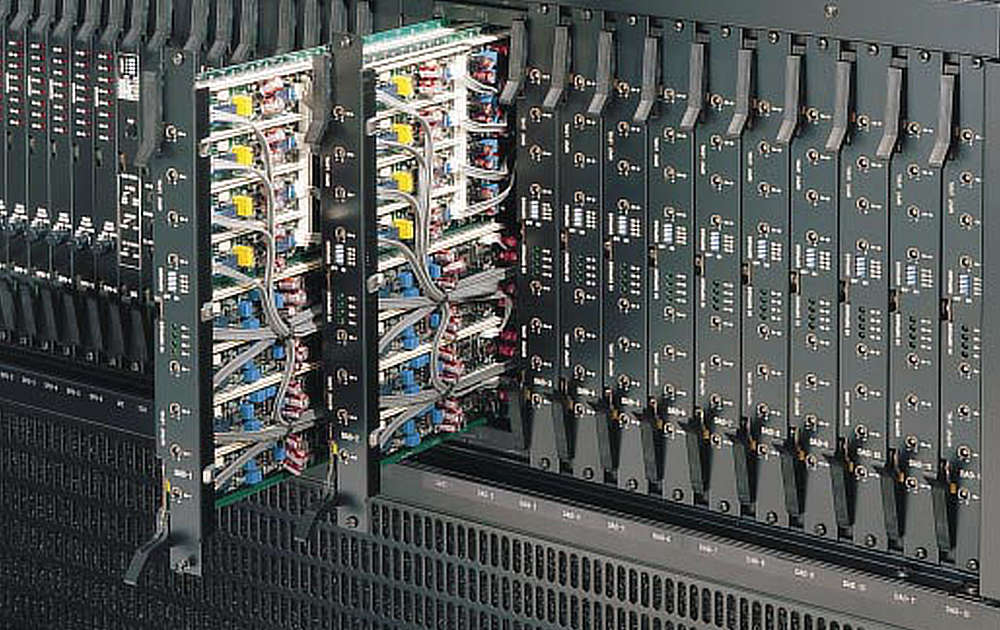 In addition to the realtime digital copy function which is available in two modes (2-channel and multichannel modes), a vocal selector mode is included to enable compilation of separate vocal tracks.

By selecting this mode, any part of different source channels can be selected into one destination channel, with variable cross fade time, by simple key strokes. Cross fade time is selectable in 16 steps by the X’FADE TIME knob on the supplied Sony RM-3348HR Remote Control Unit.

The sound memory function is enhanced both in quality and recording time. At 48kHz, a maximum of approximately 80 seconds of 24-bit stereo sound memory data can be stored in the sound memory. This sampling time can be extended to around 160 seconds in mono mode.

Reverse playback of the digital audio data stored in the sound memory is also available and it can be used for creating sound effects.

Accurate trimming of the start and/or end points of the stored data in the sound memory to be copied to a destination channel can be done by the TRIM +/- buttons whatever display resolution is selected in time code frames.

A X’FADE OUTPUT button is now provided on the Sony RM-3348HR Remote Control Unit to monitor the sound recorded on the tape allowing cross fade effects to be checked.

With a Sony 9-pin RS-422A serial remote interface connector now provided as the REMOTE-2 port at the rear panel, the Sony PCM-3348HR can be conveniently controlled from an external machine, facilitating systematization with audio and video equipment.

The Sony PCM-3348HR is equipped with four types of digital audio interface all with 24-bit resolution:

For multichannel digital I/O, MADI I/O connectors are provided in addition to the 48-channel balanced SDIF-2 digital I/O connectors. This allows interfacing with an even wider range of digital audio equipment such as MADI interfacing to an OXF-R3 Digital Audio Mixing Console. This further supports the concept of a complete 24-bit recording system using the Sony PCM-9000 Digital Audio Master Disc Recorder for the highest quality audio production. For 2-channel digital I/O, four 2-channel AES/EBU digital I/O boards and one 2-channel unbalanced SDIF-2 board are provided as standard. Any combination of four of these five boards can be installed into the four slots reserved in the rear panel.

Accepting a word sync, AES/EBU digital I/O sync or reference video (composite video, composite sync and black burst) signal as an external reference signal, the Sony PCM-3348HR can be synchronized with a variety of audio and video equipment, making it suitable for enhanced audio editing and sound-to-picture applications.
The clock signal generated by the Sony PCM-3348HR’s internal master clock (X’tal/VCO/VCXO precision) can also be used as a reference signal to synchronize external digital audio equipment.

As well as remote control from the supplied Sony RM-3348HR Remote Control Unit, the Sony PCM-3348HR can also be remotely controlled by other equipment, such as a synchronizer or a digital mixing console. A synchronizer can be connected via the parallel or serial I/F connector. An audio mixer supporting the Channel Rec Ready function can be connected via the SRIF-4 port, allowing the mixer to control the switchover of the Rec Ready/Safe status of the analog, time code and digital audio channels of the Sony PCM-3348HR. 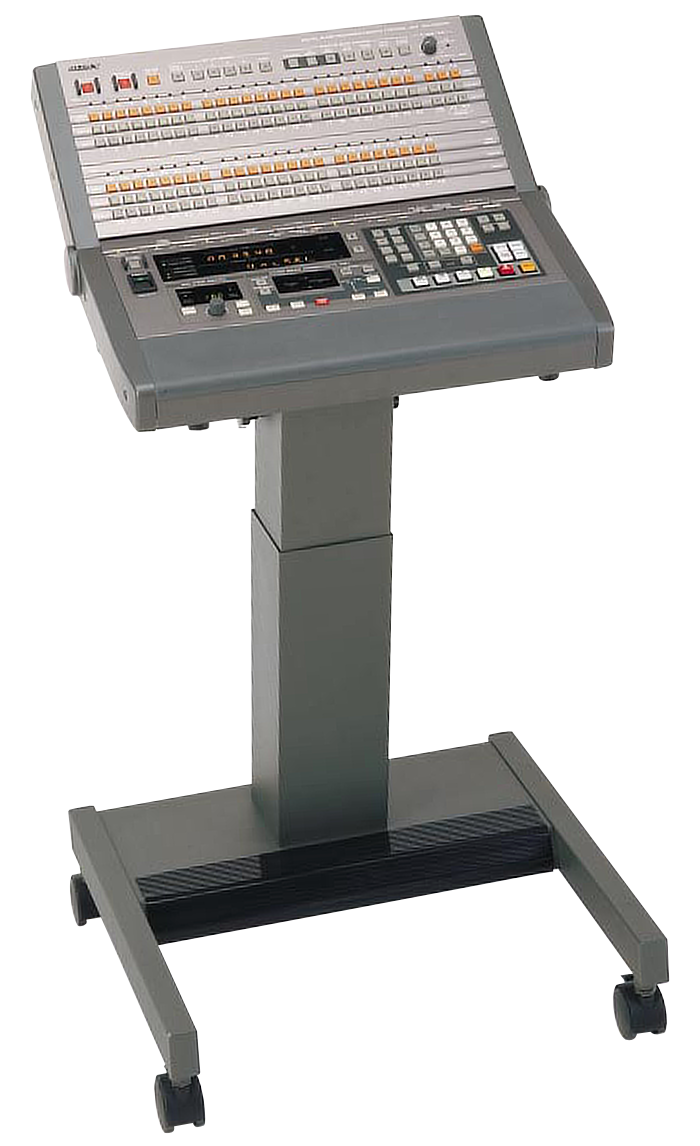 The mechanical clutch provided between the capstan and the capstan motor, the integrated microprocessor controlled servo system, and the rigid diecast chassis on which the tape transport is placed, give stable and high speed tape movement and fully support the higher tape speed of 1.5 times that required for 16-bit DASH recorders, thereby enabling 24-bit recording/playback. 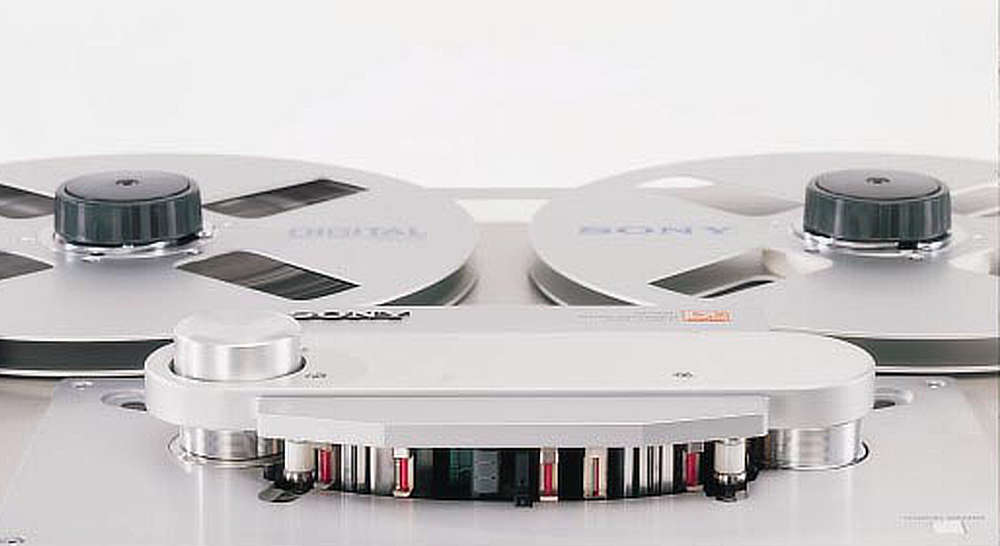 To avoid physical damage to the tape, it is automatically slowed down and stopped before the end of the reel in FF or REW mode. A further push on the FF or REW key, and the tape will be wound off completely.

The sampling frequency is selectable between 44.056kHz, 44.1kHz or 48kHz, making the PCM-3348HR suitable for use in a wide range of applications from CD mastering to digital video post production. By using an Fs shift mode, sampling frequencies of 1000/1001 times 48kHz and 44.1kHz can also be supported in playback or record.

Address Mode
After locking to an incoming time code, the Sony PCM-3348HR will continuously monitor and chase the time code, maintaining complete synchronization with the master time code. The tape can be monitored as its speed varies.

Free Mode
After locking to an incoming time code, the Sony PCM-3348HR returns to its normal playback mode and it will not be affected by any changes in the external time code.

A convenient punch in and out with cross fade operation becomes available when under Sony RM-3348HR remote control, providing a smooth and noiseless transition at each punch in/out point. Cross fade time is adjustable in 16 steps over the range of from approximately 1 to 370 milliseconds and can be selected by turning the X’FADE TIME knob on the Sony RM-3348HR.

Thanks to the use of PWM (Pulse Width Modulation) for recording and playback of cue tracks, a dynamic range of over 60dB is maintained for cue signals.

Tape can be played back over a variable range of ±12.5% normal tape speed. It is also possible to indicate tape speed in semitones over the range from -2.31 to +2.04 on the Sony RM-3348HR Remote Control Unit.

By connecting the DMU-3048 to the PCM-3348HR with a supplied meter cable and a remote cable, remote monitoring of channel status of all 48 channels of the PCM-3348HR is provided. Digital audio signal level, over level, tape condition (CRC error, interpolation, hold and mute) and recorder status (Rec and Rec Ready) can be indicated. And peak HOLD/2 seconds HOLD functions and a calibration adjustment are also available.

The most popular effect on

The Yamaha SPX90 is an amalgam of advanced acoustical research and digital technology designed to provide home recording enthusiasts a wide range of effects.