Learn More about This Product
Ready To Buy?

Monitor Controllers in 2021 come in all flavours from more than a handful of manufacturers. Several years ago I was luck y to own the Grace Design m905 Monitor Controller, which was a complete studio centre piece. The Grace Design had every option one could desire including a superb in-built DAC section, multiple monitor outputs to drive for example a main pair of monitors, perhaps a secondary near field set of monitors and perhaps a third low-fi monitor such as Yamaha NS10s for example.

With the in-built DAC the Grace Design m905 is the ultimate studio centre piece. But, many years on my needs changed and most of my old studio was sold off. These days my needs are simpler, and I settled on a simple 1RU audio interface, the Focusrite Scartlett 18i20 Gen 3. And for the most part, it has served me well, with the few exceptions as stated in the review. Also, the fact it is rack mounted next to me rather than in easy hands reach is an inconvenience at best. (The Grace had a brilliant desktop remote)

Like many lower end audio interfaces, the Focusrite does not have relays on the monitor outputs, so turn on/off produces  nasty sound through the speakers that can ultimately do damage. Sadly many monitor controllers, like the Dangerous Music D-Box+ which is a stunning bit of kit, even at that price point it has no output relays to protect the monitors, which is a major oversight at the price point.

Given my monitors, the Tannoy Gold 7’s are left on at all times (they go into a low power sleep mode) I really needed the output relays to stop the Focusrite from putting that nasty spike out to the Tannoys every time I turned it off. So I started to look at my options for a monitor controller, and while I really didn’t want to spend the coin it takes to buy the Dangerous Music D-Box+, I was willing to go there, but having confirmed the lack of output relays, it was off the table.

In a way that was a good thing, as the Dangerous Music D-Box+ has more features than I needed, and certainly was way more than I wanted to spend. So after looking at many other options, the Drawmer MC1.1 came into focus, and the more I read, the more I liked.

The first thing I noticed about the Drawmer, is that it is still made in the UK, not China. I want to support companies that do not sell out their customers by building in China for the sake of price. Remember, no one has ever moved their manufacturing to China to provide you with a better built product, it is always yo make it cheaper, not better. Drawmer continuing to make their products in the UK tells me they care more about giving it’s customers a quality product, rather than a cheaper one. I applaud and support that. 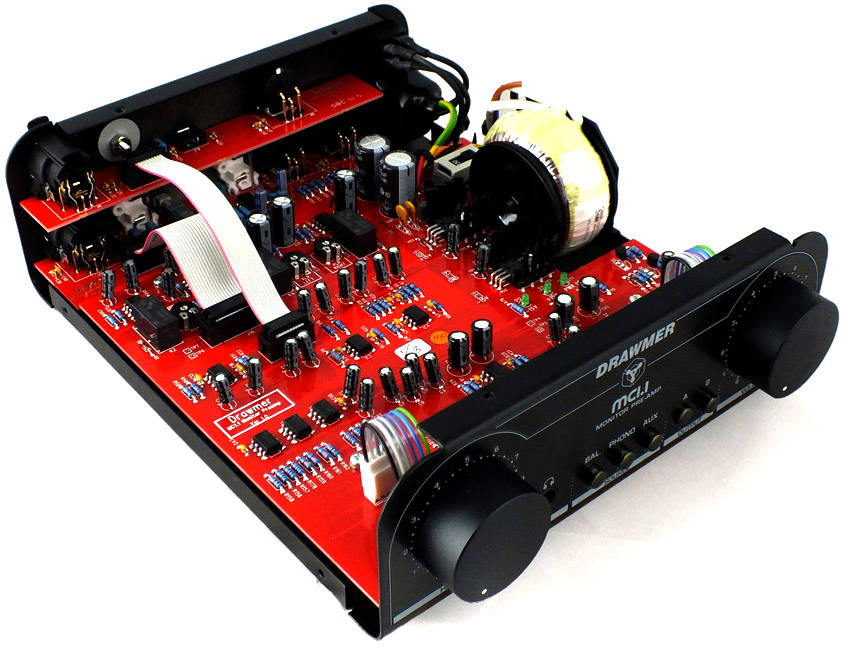 One look inside also offers clues to the sonic integrity of the Drawmer MC1.1, with many resisters and capacitors everywhere. Sure there are a number of IC chips here and there but it is mostly a discrete circuit design. How old school is that? The thick steel chassis is also a little surprising in this day and age, but of course we must remember the Drawmer MC1.1 is not a new product, it was first introduced back in 2015.

When you compare the design and build of the Drawmer MC1.1 to other product on the market today, it stands out for not only not being made in China (Are you listening Audient, Mackie, PreSonus) but also because of the discrete circuit design and sheer quality of construction, which includes a toroidal transformer driven power supply, built in.

In terms of features, the Drawmer MC1.1 is limited, deliberately so as there are other models in the Drawmer range to cover the needs of others with more complex setups. (The Drawmer MC1.1 is based on the MC2.1 in terms of circuit design.) Firstly, only one stereo balanced monitor output, but it does include another with RCA connectors to fit in with consumer audio systems.

Inputs are one stereo balanced XLR pair, plus a stereo RCA pair which can be switched between line level or phono level…yes, the Drawmer MC1.1 has a RIAA phono stage built in. While I do not need this feature, I can see many DJ setups taking advantage of this. In addition there is a 3.5mm AUX input suitable for mobile phones and MP3 players.

The front panel offers two large volume knobs, one for the main monitor outputs, and the other for the headphone output which is conveniently mounted next to the volume on the front panel. In addition there are five switches, three for selecting the input, and the other two for selecting the output. Interestingly you can have one, two or all three inputs on at the same time, and same thing for the outputs, they can both be on simultaneously.

If I was to nit pick a little, it would have been more convenient to have the 3.5mm AUX input on the front panel for most people, and the power button mounted on the rear is a little inconvenient, particularly for those who choose to rack mount the Drawmer MC1.1. (The rack mount kit does come with a front panel extension for the 3.5mm input) With the exception of those two little things, ergonomically at least the design is excellent.

For my needs, setup is pretty simple; I took the main outputs from the Focusrite and connected that into the XLR inputs on the rear. From there I connected the Tannoy monitors into the XLR outputs of the Drawmer, job done. I now have control of my monitor volume as well as headphone volume within reach, which along with the lack of turn on/off thump through the monitors, is everything I was hoping to achieve.

Another big benefit for me, is the fact that by not using the headphone outputs of the Focusrite, I have full 8 out/in on the Focusrite again. (See review for full understanding) As stated in the review of the Focusrite, many lower priced audio  interfaces advertise huge numbers of inputs and outputs, but in fact have limited AD/DA converters, and require the loss of one function to use another. In the case of the Focusrite, to use either of the two headphone sockets requires the loss of two or four outputs.

Having the Drawmer in my setup means I no longer have to suffer that inconvenience at all. I get that for some users, whos needs are different, may require two headphone outputs, but for most users with home studios, one is enough, and the Drawmer solves the problem. My choice was to sell the Focusrite and buy a more expensive audio interface, but the Drawmer solves a few problems for me so it is the better choice.

The sound quality of the Drawmer MC1.1 can be summed up with one word: Transparent. Given the price point this is quite an achievement really and Drawmer should be applauded for their efforts. Do not mistake transparent for thin either, there is plenty of clean punchy bass in the bottom end too. Essentially, the Drawmer is adding no colour to the sound which is exactly what you want from a monitor controller or pre-amp.

The Drawmer MC1.1 solved a number of issues in my studio setup, one was to prevent my monitors being nailed every time I turned off the audio interface. Secondly the convenience of having the studio volume right at hand, instead of having to reach down to the rack is quite a blessing. All the switches and volume controls feel smooth and solid.

Perhaps one of the biggest benefits of the Drawmer MC1.1 in my setup at least, was that it allowed me to get more out of my Audio Interface, instead of having to sell it and buy a more expensive solution that provided the same capabilities of the Audio Interface and Drawmer MC1.1 combined. (See Focusrite 18i20 Review)

While everyone has differing needs when it comes to a monitor controller, for anyone looking for a basic monitor controller that does not compromise on sound quality one little bit, then the Drawmer MC1.1 is just the ticket. Yes there are cheaper options out there, many of which are newer models, but few if any of the newer, cheaper options will offer the quality that this Drawmer MC1.1 offers.