The Roland RE-201 when it was released in 1974, was an engineering masterpiece. It featured a sophisticated tape-echo effect and a built-in spring reverb, with different sound variations selectable via 12 different operating modes.
User Manual
Service Manual
Ready To Buy?

Back in the day, any guitarist worth his salt had a Roland RE-201 Space Echo. It was used on stages and in recording studios all over the world, and today is emulated in pedals by just about everyone.

Front-panel controls included repeat rate (echo length), intensity (number of echo repeats), and separate levels for echo and reverb. Bass and treble controls provided EQ for the effect sound. The front panel also offered inputs for multiple sound sources, including two mics and an instrument (all with independent level controls), and a line-level device such as a mixer.

Lifting the hinged lid on top of the Roland RE-201 exposed the heart of the machine, its tape transport system. Featuring a record head, three separate playback heads, and a variable speed motor, the Roland RE-201 was capable of producing a unique range of echo effects. The delay time was adjusted by altering the tape’s speed with the Repeat Rate knob, along with selecting one or more playback heads with the Mode Selector (multi-tap echo patterns were created when multiple heads were selected). Along with the built-in spring reverb and the ability to feed the delayed sound back into the record head for multiple echo repeats, this allowed for a combination of echo effects previously unavailable in any single portable device.

A unique feature of the Roland RE-201’s tape transport was its free-floating design. The single tape loop spooled freely into a tape chamber, with a plastic cover over the top to protect the tape. Previous designs used short tape loops spun over reels, like a miniature reel-to-reel tape recorder. The RE’s loose-spool, low-tension design created less tape wear, and also allowed for a much longer tape length; this long tape length let you create echoes over three seconds in length.

The Roland RE-201 was an instant hit, quickly becoming the tape echo of choice for musicians both on the road and in the studio. Its rich and organic sound was a source of inspiration and creativity, and it’s been heard on literally thousands of popular records since its introduction. It wasn’t always used for straight echo effects, either—by manipulating the tape speed and intensity while signal was present, you could coax a Space Echo into oscillation and pitch shift for some unreal sound effects.

On the heels of the Roland RE-201’s popularity, enhanced RE-series models were released over the years. 1977’s RE-301 added Roland’s famous chorus effect, as well as sound-on-sound recording capability. 1980 saw the introduction of two additional units: the RE-501, which added XLR inputs to the RE-301’s feature set, and the SRE-555, which was basically an RE-501 in a rackmount chassis. However, nothing matches the Roland RE-201 for it’s legendary status. 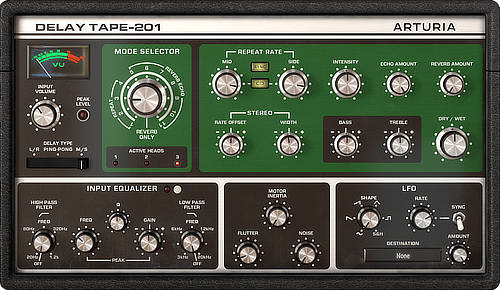 Simple to use, fun to tweak, and with the most authentic tape delay emulation ever found in a software effect, Delay TAPE-201 will give you that spacious, reverberating delay you crave.

The Galaxy Tape Echo plug-in for UAD-2 hardware and Apollo interfaces is an exhaustive emulation of the iconic, legendary ’70s unit, and expertly captures the physical behavior of the inspiring hardware. 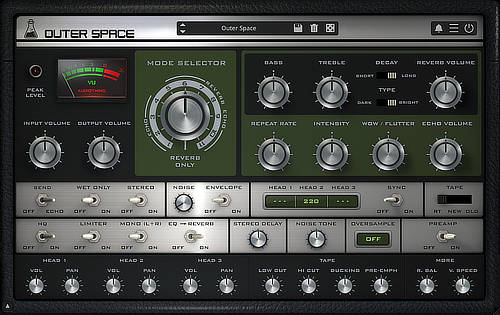 Outer Space is a faithful emulation plugin of a famous vintage tape echo made in the early seventies.