The year was 1982, Tascam introduced the Tascam 244 Portastudio, and in doing so they managed to change the recording world forever, particularly for home musicians!
User Manual
Service Manual
Ready To Buy?

Introduction to the Tascam 244 Portastudio

In 1979 Tascam released the Tascam 144 Portastudio to the world, and to say it caught on would be an understatement. Bruce Springsteen recorded his Nebraska album using the 144 and two Shure SM57  microphones. The 144 meant you could carry a studio with you when on the road, or take it to a fellow musicians house to lay down a track or two, then go back home and mix it down, all on the one machine. It was a revelation, but it wasn’t perfect, had limited equalization options, and Tascam in 1982 delivered to us the Tascam 244 Portastudio.

It was at this point in my own life as a budding song writer, that I jumped on board and bought the Tascam 244 Portastudio. Having recently completed my training at SAE (School of Audio Engineering) in Surry Hills, Sydney, I was ready to take on the world. I produced hundreds of recordings on my Tascam 244 in the years I had it, I truly loved the thing. It was so easy to use, had really great sound quality (thanks in part to the excellent DBX noise reduction system ) and given the way I used it, produced excellent results. The addition of two band parametric EQ allowed for much better tuning of the sound being recorded, and the ability to record on all four tracks simultaneously allowed greater flexibility too.

Unlike other users, and unlike it was intended to be used I must say, I never did the bounce down thing with my Tascam 244. I was fortunate to have a couple of Sony DAT recorders at the time so I would put a MIDI time code onto track 4 to sync with my keyboards and drum machines, then lay down guitars and bass on the remaining three tracks. I would then mix that out to the Sony DTC-1000ES DAT Recorder. When I was happy with that mix, I would then record the DATs stereo mix back into the Tascam 244 on track 1 and 2, leaving me with two tracks for vocals. If I needed more than two vocal tracks, I would then mix that out to the DAT recorder, feed it back in on tracks 1 and 2 and add another two vocal tracks.

The final step of course was the final mix out to the DAT recorder, and job done. Was this a better process than bouncing down within the 244 itself? Absolutely, the results spoke for themselves. It did not make me a famous song writer, but it did allow my band at the time to secure live work off the strength of the demos we recorded on the Tascam 244. I eventually moved on to an 8 track Portastudio (a Tascam 488) which I never loved as much as the 244, and then of course to an ADAT and Mackie 1604 that was having it’s day in the sun during the early 1990s, but I loved that setup even less.

Ultimately it was the ease of use, and simplicity of the Tascam 244 that cemented it in the hearts of so many musicians at the time. Yes better sound quality could be had from a reel to reel setup, but try lugging that over to your bass players house to lay down some tracks! Many products followed from Tascam, Fostex and others, but it is the Tascam 244 that is responsible for the home recording studio phenomena that followed. It may not have been for the wealthy recording artist, but it allowed so many up and coming musicians the ability to turn out great quality demos from home, and without the expense of a recording studio, and that, to the determent of recording studios the world over, changed the world of recording forever. 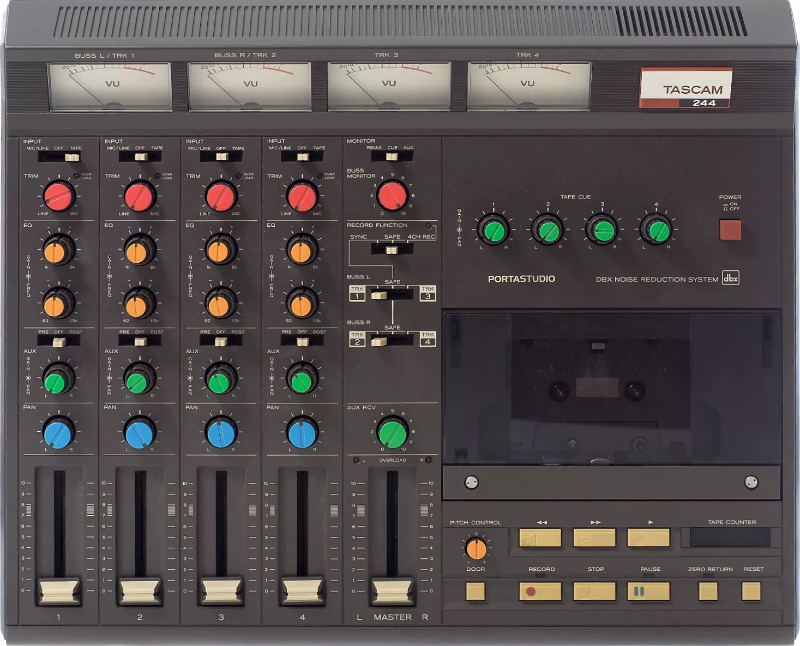 The Tascam 244 Portastudio is an extremely versatile tool for creative people in a variety of fields: musicians, vocalists, arrangers, composers, multi-image producers, and film/video producers. The 244 is a complete recording system. Incorporating a full-function mixer and a high-performance 4-channel multitrack cassette recorder. Plug in microphones, instruments, and a pair of headphones or two, and you have everything needed to begin recording.

Sophisticated features
Each input channel has a 2-band parametric type sweep equalizer, plus an “off” position on the Mic/Line Tape switch for muting unused channels. The 244 accepts up to 4 microphones, line-level sources, or electronic instruments without the need for a ‘direct box”. There are a variety of outputs for mixdown to any 2-track recorder, and for monitoring via headphones and /or loudspeakers (with an external amplifier system).

The Tascam 244 also has numerous patch points which, channel-by-channel, allow the insertion of a variety of outboard signal processors. The aux mixing buss is stereo, so it can be used for an effects send mix or an additional performer headphone cue mix. And the Remote Punch [n/ Out footswitch jack means performers working alone can plug in an optional footswitch (RC-30P) and “punch -in” the record mode without a beat.

The Mixer Section
The 244 Portastudio’s mixer section has everything needed to record live performances, mix recorded tracks with new sources during overdubs, to create separate mixes for effects and performer monitoring, and to remix the multitrack cassette to a finished stereo program. It can even be used for occasional live sound reinforcement mixing. Channel controls include Mic/Line-Off-Tape selectors, trim controls and overload indicators, two-band parametric EQ, Aux gain and pan controls with Pre-Off-Post selectors, pan pots and smooth, noise-free linear faders.

One of the transport’s three motors is used only for moving the heads in and out of position, thus preserving alignment. Reliability is further ensured because the capstan motor turns on only when a cassette is in place. Convenient features include a large, fluorescent 4-digit tape counter, a Zero Return function, 4 independent Tape Out jacks, and a ± 15% pitch control.

DBX Explained
DBX is a wide-band compression-expansion system which provides a net noise reduction (broadband, not just hiss) of a little more than 30 dB. In addition, the compression during recording permits a net gain in tape headroom of about 10 dB. A compression factor of 2.1 is used before recording; then, 1:2 expansion on reproduce.

These compression and expansion factors are linear in decibels and allow the system to produce tape recordings over a 100 dB dynamic range  an important feature, especially when you’re making live recordings. The DBX employs RMS level sensors to eliminate compressor-expander tracking errors due to phase shifts in the tape recorder, and provides excellent transient tracking capabilities.

To achieve a large reduction in audible tape hiss, without danger of overload or high frequency self-erasure on the tape, frequency pre-emphasis and de-emphasis are added to the signal and RMS level sensors. If you’re an electronics engineer, all of the above gab may tell you the whole story of what’s going on in DBX, but if you’re not, to make things a little easier to understand we’ll ask you to use your imagination. Imagine four little recording engineers in the box their hands on a volume control.

They are incredibly fast but very stupid, so you must give them a set of rules. You tell them to raise signals that are below “0VU”, and reduce signals that are higher than “0VU” The lower the signal is, the more they raise it, and the higher levels above “0VU” get lowered more and more as they go up in level past “0”.

This is the 2:1 compression . You also tell them to call “0.316 V” “0VU”. Here they do nothing, no change except frequency pre-emphasis or boost. Since you know they are going to keep the high levels under control, you can raise the “‘top end” a bit and still not overload the tape.

Just to keep it simple for them, the boost in highs is fixed. They put it in all the time no matter what level changes they are making. Now we play the tape back, and say 0K, do everything backwards. Levels above ‘ ‘0.316 V” “0 VU” are raised and levels below ‘”0.316 V” are lowered, and while you’re at it, fellows, take off the extra top end as well. Follow the rules in reverse.

As long as you don’t confuse them by shifting the “0VU” point, they work just great, but – don’t put in more than ‘ ‘0.316 V” as zero VU, and don’t make the tape playback zero anything other than “0.316 V’ either. As we said they’re very dumb and will follow instructions very precisely. Differing levels will produce decoding errors.

The reason these errors may not be objectionable is that people could have played or sung or whatever with a little more or less dynamics. A small change won’t be as noticeable as a mistake, but it is not perfect. The tolerance here is not electronic, it’s human. To get exactly what you put in, it is necessary to get an exact “0VU”. 0.316 V in and out. The system is level sensitive although it is realistic to say it is ‘artistically” forgiving.

Subsonics and Interference
DBX incorporates an effective bandpass filter with -3 dB response at 20 Hz and 30 kHz. This filter suppresses undesirable sub- and supersonic frequencies to keep them from introducing errors into the encode or decode process. However, if rumble from trains or trucks, is picked up by your microphone and fed to the DBX – filters are not perfect modulation of the program material during low level passages may occur.

This low frequency component will not itself be passed through the recorder and so, will not be present at reproduce for proper decoding. If this low level decoding error is encountered, and subsonics are suspected, we suggest the addition of a suitable high pass filter for 244 only—in the Microphone Line or at the ACCESS-SEND-RCV jacks ahead of the DBX and after the mic pre-amplifier for further attenuation of these subsonic frequencies.