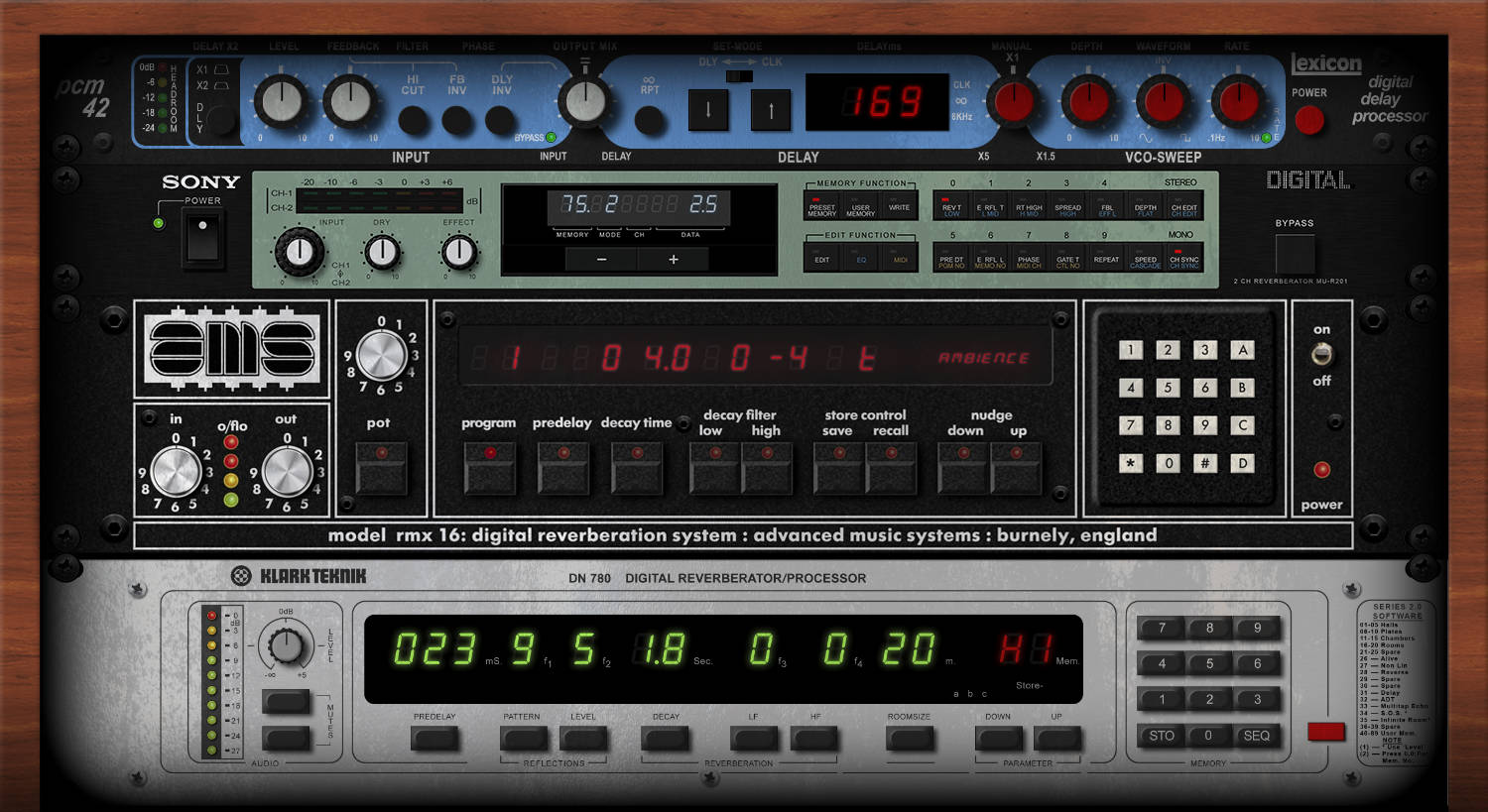 The 80s sound was defined by the rather ‘live’sounding mixes from engineers such as Bob Clearmountain and the up and coming Hugh Padgham who along with Phil Collins* defined the drum sound of the period.

It is safe to say that the 1980s sound will forever be remembered for reverb, and lots of it. While digital delays played their part too, it was the new digital reverbs of the time that provide the 80s with it’s defining sound.

The AMS RMX 16 dominated studios the world over, and is still in use today, but the Japanese manufacturers delivered some great digital reverbs too, such as the Roland SRV-2000 and the Yamaha REV5. Right to the end of the decade, better and more affordable reverbs hit the market, we were spoilt for choice!

One key aspect of the 80s sound of course, is the sound of gated reverb, a sound that is credited to Phil Collins, but in actual fact was accidentally discovered by Hugh Padgham during the making of Peter Gabriel’s third album, and used on the opening track “Intruder’.

In short, the new SSL mixing console featured a mic feed from the studio so that the mix engineers could talk to the musicians in the studio. When Hugh Padgham clicked on the listen button while Phil Collins (who was playing drums on the Intruder track for Peter Gabriel) was practising, he heard this huge drum sound.

The sound was huge for two reasons, the studio was a very ‘live’ sounding room with stone walls, and the listen feed had a compressor on it. This was the beginning, but then after Hugh Padgham asked the studio’s electronic engineers to rewire the desk so that they could record off that listen feed, he decided to put a noise gate on it, and it was that moment that the 80’s sound of Gated Reverb was born.

* Shortly thereafter this same sound was used by Phil Collins on his debut solo album (which was also engineered by Hugh Padgham), Face Value. And to be fair, it was the first commercially successful use of the gated reverb sound, which perhaps explains why it is Phil Collins that is so often credited for creating the 80s sound.

It was also around this time that AMS released their now legendary RMX 16 digital reverb that featured a preset called Non Linear. This preset emulated the gated reverb that Hugh Padgham discovered during that Peter Gabriel session, and in fact Hugh Padgham assisted AMS with that reverb’s preset sounds.

Here is an 80s effects rack that we personally would love to integrate with our DAW, and while you may not be able to afford it all, there are some pieces here that can get you close on their own. For example, the Roland SVR-2000 is wonderful on drums and brass and you can get them for about $200.

Likewise the Sony MU-R201 is the best kept secret of all, patch 31 on snares which has a beautiful stereo spread, and you are in 80s heaven and they can be picked up for around $250-300. While the Roland SDX330 is from the early 90s, it provides glorious chorusing effects, another heavily featured sound in the 80s, particularly on guitars.

Given the huge cost of second hand AMS RMX 16’s these days, I would suggest picking up a Klark Teknik DN 780 instead as it’s gated reverb is brilliant at reproducing the classic 80s sound of gated reverb.

Peter Gabriel’s Intruder was the first ever recording of Gated Reverb, and was the session where Hugh Padgham discovered the technique.

In The Air Tonight by Phil Collins

In The air Tonight by Phil Collins was the first commercially successful use of the new found gated reverb technique created by High Padgham.